A gold mine of revelations. - Mary Norris, The New Yorker's Comma Queen 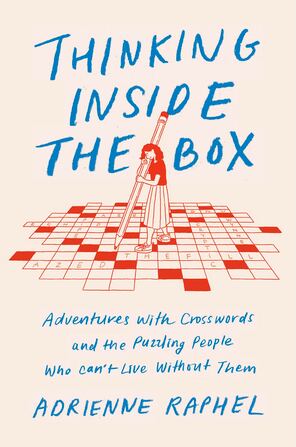 ABOUT THINKING INSIDE THE BOX
​A delightful, erudite, and immersive exploration of the crossword puzzle and its fascinating history by a brilliant young writer

The crossword is a feature of the modern world, inspiring daily devotion and obsession from not just everyday citizens looking to pass the time but icons of American life, such as Bill Clinton, Yo-Yo Ma, and Martha Stewart. It was invented in 1913, almost by accident, when a newspaper editor at the New York World was casting around for something to fill some empty column space for that year’s Christmas edition. Practically overnight, it became a roaring commercial success, and ever since then has been an essential ingredient of any newspaper worth its salt. Indeed, paradoxically, its popularity has never been greater, even as the world of media and newspapers, its natural habitat, has undergone a perilous digital transformation. But why, exactly, are its satisfactions so sweet that over the decades has it become a fixture of breakfast tables, nightstands, and commutes, and even given rise to competitive crossword tournaments?

Blending first-person reporting from the world of crosswords with a delightful telling of its rich literary history, Adrienne Raphel dives into the secrets of this classic pastime. At the annual American Crossword Puzzle Tournament, she rubs shoulders with elite solvers of the world, doing her level best to hold her own; aboard a crossword themed cruise, she picks the brains of the enthusiasts whose idea of a good time is a week on the high seas with nothing but crosswords to do; and, visiting the home and office of Will Shortz, New York Times crossword puzzle editor and NPR’s official “Puzzlemaster,” she goes behind the scenes to see for herself how the world’s gold standard of puzzles is made.

Equal parts ingenious and fun, Thinking Inside the Box is a love letter to the infinite joys and playful possibilities of language, and will be a treat for die-hard cruciverbalists and first-time solvers alike.
**
​
"Raphel delivers an intriguing and informative look at the crossword puzzle. . . This enjoyable survey illuminates many lesser-known aspects of a wildly popular pastime." - Publishers' Weekly

“For crossword puzzlers of every ilk, from solvers of the Monday-edition no-brainer to pencil-chewing addicts of the cryptic, Thinking Inside The Box is a gold mine of revelations. If there is a pantheon of cruciverbalist scholars, Adrienne Raphel has established herself squarely within it.” – Mary Norris, bestselling author of Between You & Me: Confessions of a Comma Queen and Greek to Me: Adventures of the Comma Queen

“Thinking Inside the Box is a witty, wise, and wonderfully weird journey that will change the way you think. Raphel is an insatiably curious and infectiously passionate guide who plunges headfirst into the rich world of puzzles and the people who love them to reveal the fascinating acrobatics of language and the inner life of words. This book is a delight.” – Bianca Bosker, bestselling author of Cork Dork: A Wine-Fueled Adventure Among the Obsessive Sommeliers, Big Bottle Hunters, and Rogue Scientists Who Taught Me to Live for Taste

“If you remember precisely where you were when you first encountered the words ETUI and ONER, I suspect you’ll be enchanted by Adrienne Raphel’s Thinking Inside the Box. This delightfully engrossing, charmingly and enthusiastically well-written history of the crossword puzzle tells you everything you need to know, and any number of things you couldn’t have imagined, about the invention and eventual world domination of the thing that daily scratches a particular human itch: ‘the yearning to solve a riddle, the desire to fill in a blank space, the obsession with perfection.’” – Benjamin Dreyer, bestselling author of Dreyer’s English: An Utterly Correct Guide to Clarity and Style

“Thinking Inside the Box, like the puzzles it elegantly features, is full of treasures, surprises and fun. Adrienne takes readers from Will Shortz’s empire hub in Pleasantville, NY, to the pages of Vladimir Nabokov’s crossword butterfly puzzle doodles, to the blistering hotel ballrooms of crossword competitions, richly bringing to life the quirky, obsessive, fascinating characters in the crossword world. You’ll never think about filling in the squares the same way again.” – Mary Pilon, bestselling author of The Monopolists: Obsession, Fury, and the Scandal Behind the World’s Favorite Board Game and The Kevin Show: An Olympic Athlete’s Battle with Mental Illness

“Who would ever have thought the innocent crossword would hide such an intriguing story! After reading Adrienne Raphel’s beautifully researched account, full of humor and personal insight, I’ve come to see these puzzles in a new light, and I certainly now treat their creators with fresh respect.” – Professor David Crystal, author of The Cambridge Encyclopedia of the English Language