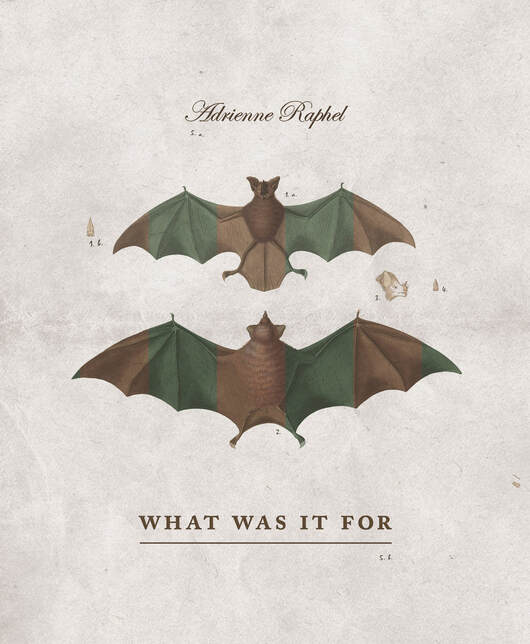 WHAT WAS IT FOR
​Winner, Black Box Poetry Prize​ (selected by Cathy Park Hong)

​In her debut collection What Was It For, Adrienne Raphel revitalizes the topsy-turvy lyric and its evergreen sagacity. Through playground doggerel, charm, and riddle, these poems cry fair and foul to a world where pâté geese dabble in fields of lavender, crises get wallpapered over, hot air balloons stalk pleasurably, cash changes for gold, and the moon sinks into the sea to the thrum of the metronome. That world is this, our own and only, so reader, climb aboard: like a carousel, each poem loops round and round, granting dizzying vistas. All the while, these poems spill over with wonder—as in query, as in jubilee—just as a child chants why, but why, but why. By way of answer, What Was It For offers an immortal, resounding question.

Buy What Was It For
​"Raphel reanimates and vivifies the idea of magic words — incantatory and enchanting." - The New York Times Book Review

"In Raphel’s world, a dimension over from Wonderland and Neverland, whimsy rules tyrannically, best intentions veer woozily off, and the divinest sense lies in nonsense. ... Think of the carousel that closes Catcher in the Rye; think of the climactic carousel of Hitchcock’s Strangers on a Train; Raphel is these and more, simultaneously the carousel, its horses, the desperate crawler underneath. ... From the first poem to the last, Raphel gives that question and its answers the circular runaround, a maddened carousel ride." - BOMB

"[Raphel] is operating technique in the service of imagination, and what she discovers in the process is spellbinding." - Lit Pub

"Adrienne Raphel's lexical sleight-of-hand in her debut collection astonishes me. Her poems are feral and full of feverish delight. Her corkscrewing rhymes enchant as she incants the phenomenological joy of living among earthly and unearthly wonders. Raphel takes Victorian nonsense verse into the twenty-first century and transforms it to her own strange and genius song." - Cathy Park Hong

"As maddening, incantatory, and exhilarating as the nursery rhymes of the most gifted, twisted children, What Was It For trembles with the terrifying, unspooling energy of a maypole rewinding in eternity. 'Pulsing and pulling concentrically// to the center of centers,' 'unfurling/ in crooked angles,' and falling 'without falling,' Raphel's dangerous, luminous mode is the 'carousel spell'—enchanted and hell-bent." - Robyn Schiff

"Nothing escapes Adrienne Raphel's notice—whatever her eye trains itself on blooms with mystery, logic, fractal intelligence and a feverish, near-mathematical stumped- ness. Her depth of thinking and clarity of observation leave no assumption unchecked; it's almost as if the world—with its lavender and feathers and salt and balloons and passports and goats and alienation—exists to destabilize this knowing voice, to goad it into rules for breaking and to show its range. It's not un-Homeric. It's miraculous. It's not "wordplay" when the words are playing us. Reading this book is like stumbling onto some amazing circumstance where T.S. Eliot, Sylvia Plath, Mina Loy, and Gerard Manley Hopkins are all together, utterly serious and in rare form, playing a drinking game in what looks like an abandoned musical theater set with a boardwalk as a backdrop. What a room! Depressive Mother Goose slumps in a corner with Edward Lear deep in his Morbids while Gwendolyn Brooks and Gertrude Stein win several rounds handily. But, at a certain layer or fathom in every poem, all that company drops silent and a reader is left with the rarest of presences: the inner life of a poet for whom every moment of consciousness yields a discovery. This is a book that calls up ancient and immediate ways to play—and if there is a catastrophe looming (the big one looms like a cloud in the sky of this book) Raphel's work will still make cosmic sense, will give joy, regenerate, and remind us (as her title does) what it was for." - Brenda Shaughnessy